Meteora is a large arrangement of vertical sandstone rock formations overlooking the small town of Kalabaka in Thessaly central Greece. These large pillars of rock support several ancient monasteries that were constructed in the 13th and 14th centuries. They have been designated by UNESCO as a World Heritage Site. The monasteries attract many tourists throughout the year, especially during the summer months and photography can be challenging in some parts during the high season. Visiting early in the year or during the autumn months is the best approach when there are fewer tourists around. However, having said that is a truly magnificent location and still worth photographing even if you find it challenging in places. Staying in Kalabaka which is only a few kilometers away would be the best approach allowing you to explore potential photographic viewpoints and return to them for sunrise and sunset.

The video is illustrating the approximate area that the panoramic is going to extend. 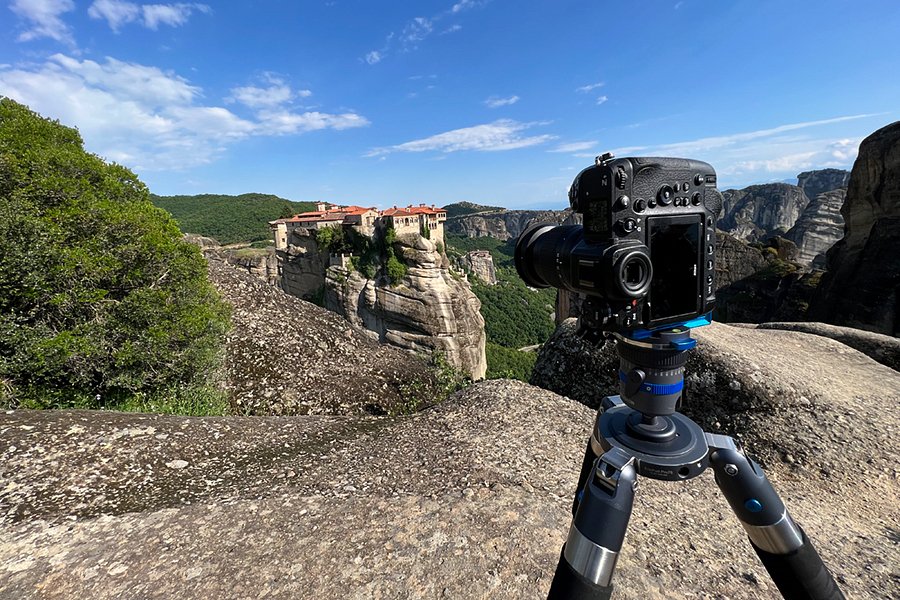 The Holy Monastery of Varlaam, Meteora

The Nikon Z 9 with the Z 24-70mm lens setup, with the Novoflex L-bracket in place on the ClassicBall 3II in reverse to allow even horizontal panning for the capture of the images needed to construct the final composite file. The camera assembly is supported on the Novoflex PRO75.

The Holy Monastery of Varlaam, Meteora

One of several panorama composites taken at this location. The 15-image panorama of the Holy Monastery of Varlaam was stitched together in Photoshop to produce the final 500Mb file.