The video shows the general view I wanted to capture in the finished panorama.

When photographing away from base, it is always a compromise as to what to take and what to leave behind. For the majority of my photography, I use the Novoflex MagicBall. I like its versatility, and exceptional support with no creep whatsoever. It also gives you greater rotational movement than any other ball head.

However, when traveling abroad I am frequently shooting a combination of macro and landscape including panoramic photography. Carrying two heads is not really an option in my case as I am already maxed out with other gear and there is only so much you can bring on board an aircraft.

I find in these situations using the ClassicBall3 II reversed with a Q=Base attached allows me two switch from macro to panos without having to add any additional bases or having to waste valuable time swapping between the two. The dual function of the ClassicBall3 II which is essentially two heads in one along with the Novoflex PRO75 provides perfect stability giving me the benefit of working between different photographic disciplines. Another advantage is the overall reduction in weight without compromising on stability which is especially important when shooting closeups.

The image above is one of several I captured in slightly different positions. The boulder in the foreground was pretty awesome and difficult to navigate around. I wanted to show as much depth to the rock that the monastery was built on. The final composite image is made up of 15 images stitched together in Photoshop. 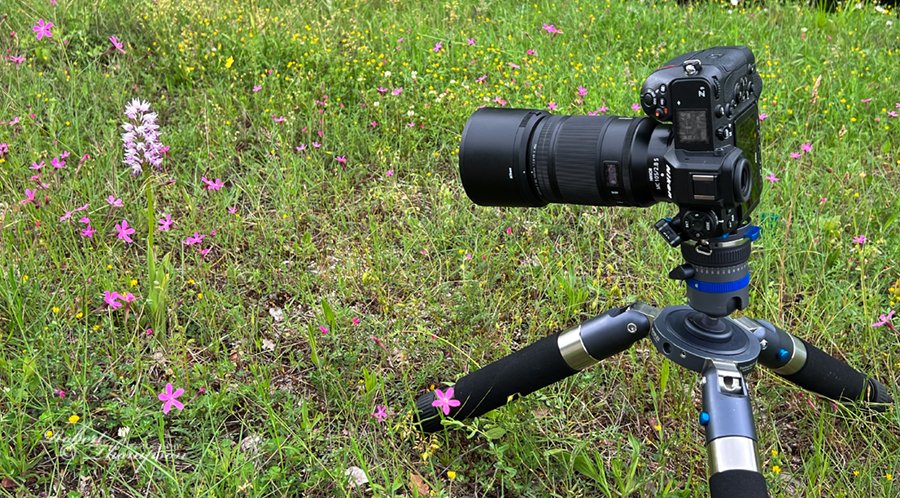 Monkey Orchid Orchis simia was photographed in the field in northern Greece.

The Nikon Z 9 and the Z MC 105 macro supported on the PRO75 and ClassicBall3 II. This setup is an ideal compromise when weight is important. The classicBall3 II is more than capable of supporting a weight up to 8kg (17.64 lbs).

A Close-up of the orchid flower spike shows just how sharp the image is. Having the correct tripod support in macro is essential in my opinion. There must be no movement whatsoever. If the assembly moves when you put your finger on it then get a new tripod and head!